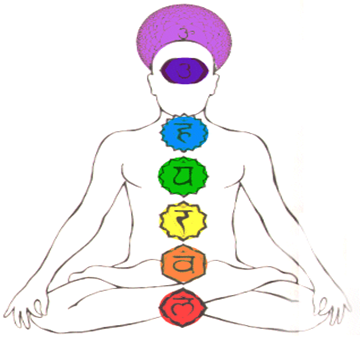 1. Base Chakra (Renal) -Wants, foundation of energy, Seat of passion, the pioneer, the fortress (Red Jasper)

Located at the base of the spine, the base chakra is sometimes represented as a vortex with a downward opening. In some systems it is related to the adrenal glands. Although physically a long way from the base, the adrenal glands reflect the survival instinct of this chakra. The concentration of nerves in this area is called the coccygeal plexus.

The second chakra, sometimes called the sex chakra, is located in the lower abdomen, between the navel and the pubic bone. It is related to the sacral vertebrae in the spine, the sacral plexus of nerves and the sex glands, the ovaries and testicles. The chakra is associated with emotional and sensuality.

The third chakra is located on the front of the body between the bottom of the ribcage (diaphragm) and the navel. It is concerned with personal energy and power and is associated with the adrenal glands and the pancreas. The solar plexus chakra is named after the complex of nerves found here and in connected to the lumbar vertebrae.

4. Heart Chakra (Thymus) - Devotion to self, Embracing the world, touching others, freedom to be, following the heart

The fourth chakra is the heart, located in the centre of the chest, associated with the thoracic vertebrae of the spine. The related gland is the thymus, a small gland above the heart vital for growth and the maintenance of the immune system. Two nerve centres are found here, the pulmonary plexus and the cardiac plexus. The chakra deals with love and relationships.

The fifth or throat, chakra is located near the cervical vertebrae and the base of the throat. It manifests communications and creativity. The thyroid and parathyroid glands(which control the body’s metabolic rate and mineral levels) and the pharyngeal plexus are found here.

The sixth chakra is the brow, located in the certre of the forehead. This is linked to the pineal gland that maintains cycles of activity and rest and to the carotid plexus of nerves. The brow chakra directs intuition, insight and imagination.

the seventh chakra, the crown, is located just above the top of the head and influences all the higher brain functions. It is connected to the pituitary, the gland that controls the whole endocrine (hormone) system. The entire cerebral cortex is influenced by this centre. The crown is associated with knowledge and understanding.